In 2014 Jack was commissioned by Barnaby Festival to build a site-specific artwork, which became the Inside Out House.

The installation explored issues surrounding themes of sustainability, industry and the pioneering spirit of the homesteader.

For Inside Out House at Barnaby Festival, Jack repurposed discarded office furniture from the then-recently refurbished Macclesfield Town Hall to build a structure resembling a house.

In its location, directly outside the Town Hall, the structure also referenced the absurdities of town planning decisions. 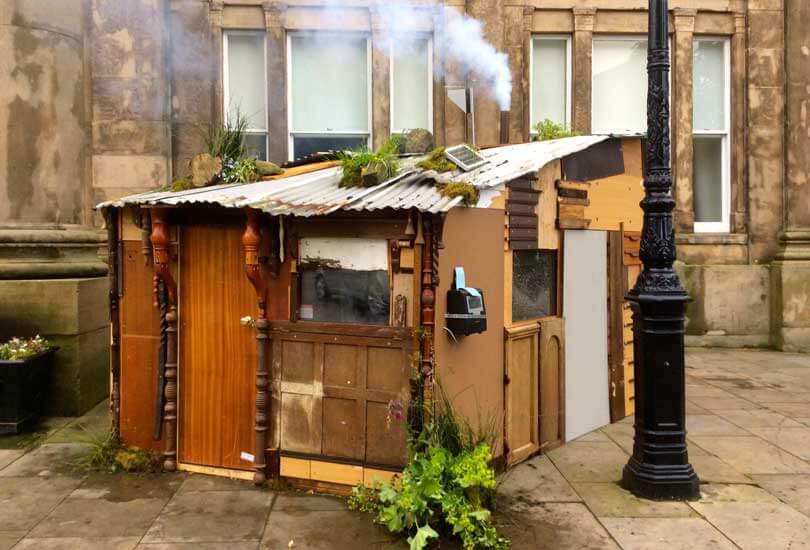 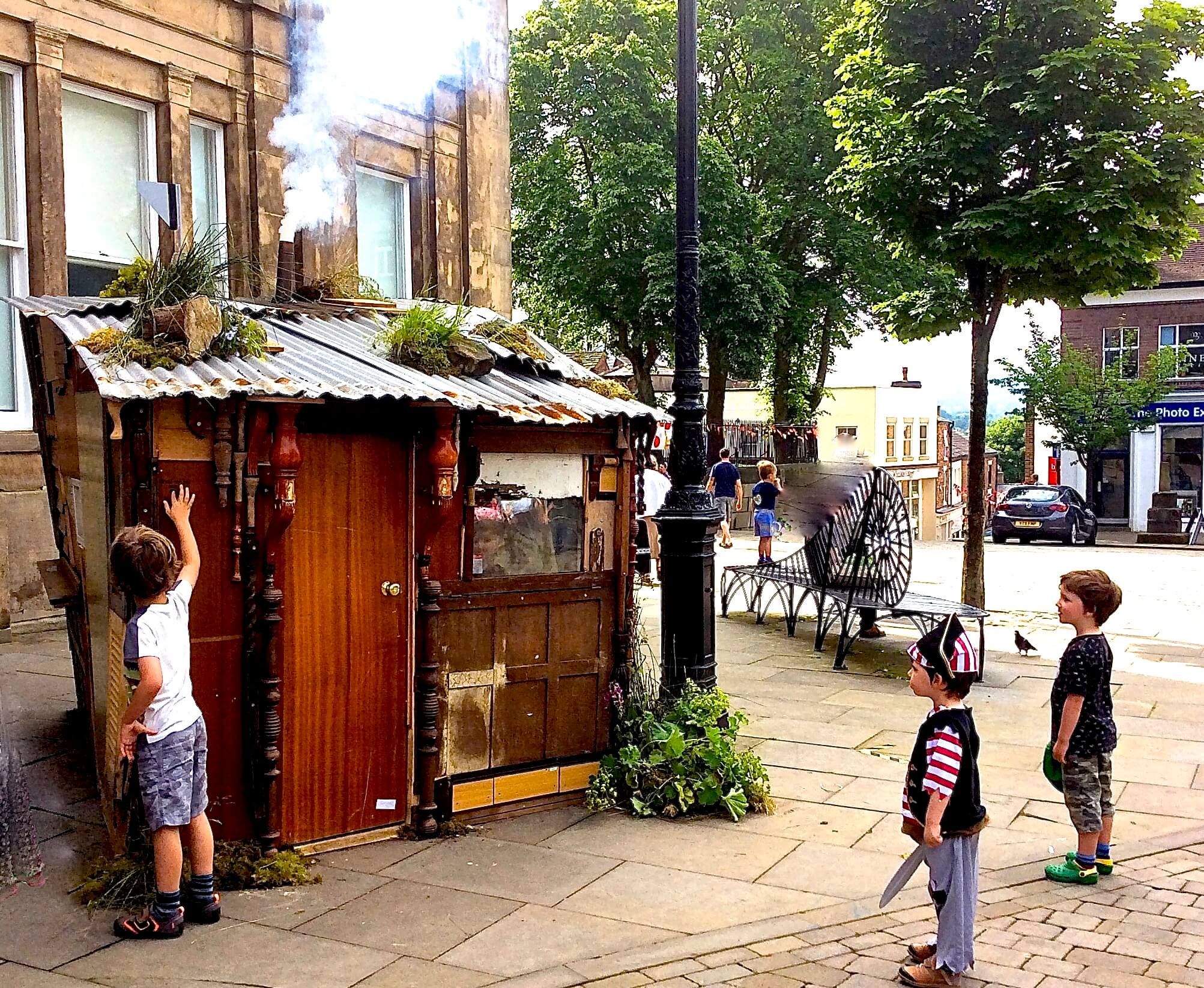 You have a research-based practice and often work with found materials. In what ways do these objects inspire your creative process?

Sometimes the discovery of an object triggers ideas for new work.

The objects can be anything from a wind-blown plastic carrier bag snagged in the branches of a tree to some ancient tennis balls found behind wood panelling at Little Moreton Hall. All objects have a ‘history’ – this is what contemporary philosopher Bruno La Tour refers to as the ‘social lives of objects’.

The objects may have become lost, survived some kind of trauma, but their presence and discovery tell us a story and reveal something about the way we live our lives.

What would you like people to take away when experiencing the Inside Out House?

Visitors to Barnaby Festival 2014 connected with the work in different ways.

At the time, many residents of Macclesfield were caught up in heated discussions with the council and town planning about the repurposing of the Town Hall and a proposed shopping development in Macclesfield. I hope that the presence of this strange, temporary structure fed into their consciousness in one way or another. Children loved interacting with the installation and pressing the ‘doorbell’ – which caused a whisp of smoke to emit from the chimney. One rainy night a rough sleeper broke into the Inside Out House and used the structure for shelter, spending the night there.

How has the pandemic affected your professional practice?

It’s been a difficult year for arts and culture, as COVID has created many challenges for artists. Many shows and commissions I had been involved in were at best curtailed or postponed, while some were cancelled completely. I was due to travel to New York to install a second edition of No Borders, my large-scale outdoor neon artwork, which can still be seen at Yorkshire Sculpture Park in the UK. The trip and the preview had to be cancelled, but fortunately the fabrication and the installation still went ahead, and the artwork was eventually installed at Alnoba Sculpture Park USA.

All in all, it has been an overwhelming time, but I’ve continued to do my research and make new work in my studio at Paradise Works in Salford and at my home studio in Macclesfield.

Your work is activist in nature. Is there a particular issue you are interested in right now that might turn into an artwork in the future?

We are living through an extraordinarily turbulent period, with many aspects of our everyday lives in turmoil.

The last 18 months have brought many social inequalities and political issues to the fore, resulting in protests, sloganeering and outpourings of opinion.

This is overwhelming at times, but I think for artists like myself it creates a hotbed of imagery, material and ideas. I’m currently focusing on a new body of work where I hope to bring some of the chaos and turbulence of these times together in a large-scale multi-media installation for a gallery exhibition.

What was the leading idea behind opening Paradise Works?

I set up Paradise Works in February 2017 with my friend and fellow artist Lucy Harvey and a core group of Manchester based artists.

Due to the fast-paced regeneration of the city, many artists whose studios were based in old mills and industrial buildings were either evicted from their studios or forced to move out of the city altogether.

We know how important it is for artists to remain as close to city centres as possible, and we know that cities benefit greatly from the presence of artists and creatives.

An opportunity to lease an industrial building, Irwell House on the Salford-Manchester border, came up and after much wrangling we took on 12,000 square feet. Within a few months, we set up 37 artists’ studios from scratch, developed a project space, a gallery programme, an Artist in Residency programme and a graduate bursary scheme, and launched Open Studios in the autumn of the same year.

Paradise Works is now 4 years old. We go from strength to strength. Our mission is to secure a long-term artist-led community for the future generation of artists and to help them forge sustainable careers and remain in the region. 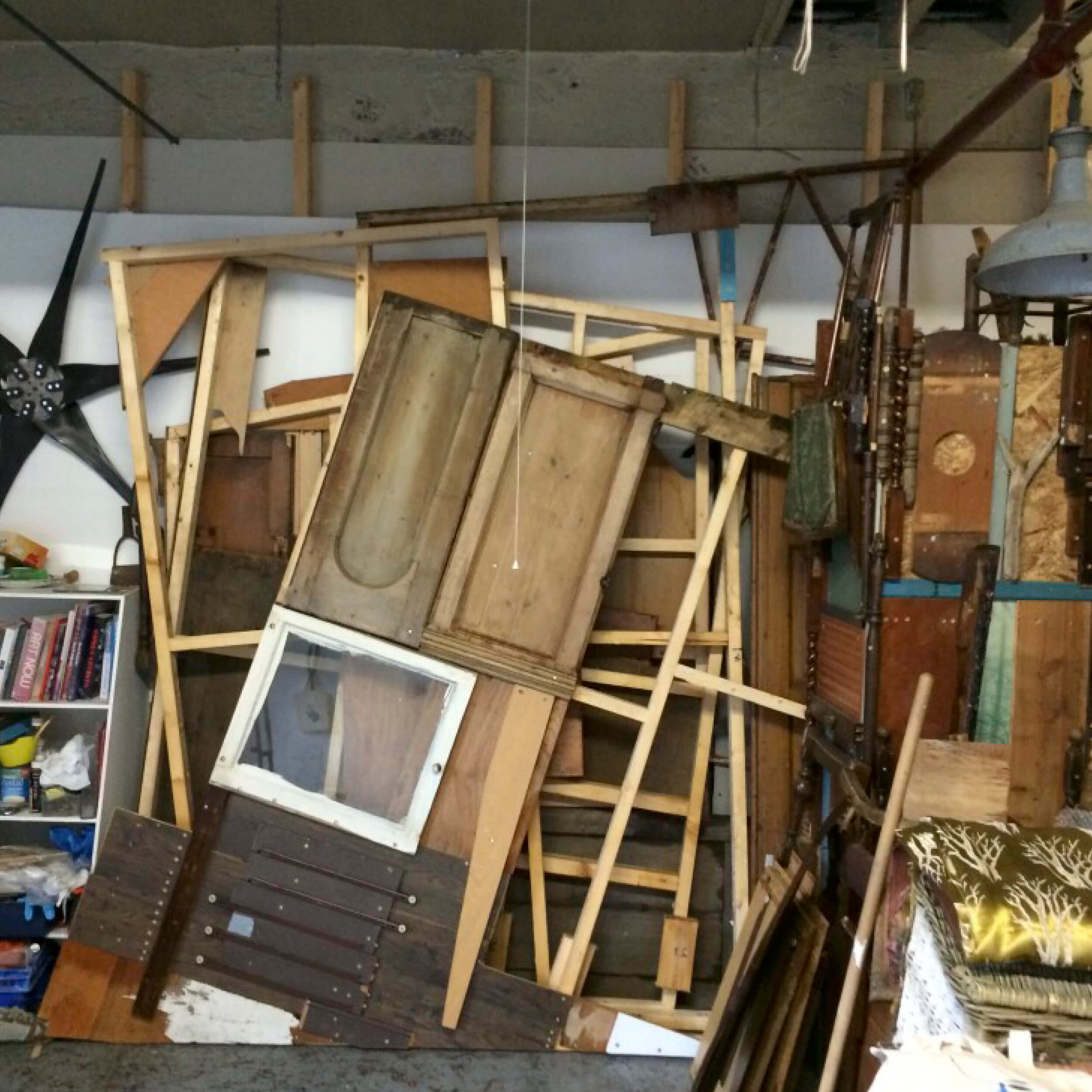