Matthew Rosier is an artist who creates installations and experiences for the public realm.

His research-led, collaborative and site-responsive practice engages with the built environment, heritage, sustainability and technology.

In 2018 Matthew created a public art installation 108 Steps in Macclesfield. The projection captured a week in the life of the historic staircase in the town and then projected it back on the site for the public to experience and interact with. 108 Steps is an artwork by the artist Matthew Rosier, commissioned by SHIFT, Cheshire East Council with support from Barnaby Festival, Macclesfield Town Council and Arts Council England, and produced by FutureEverything. 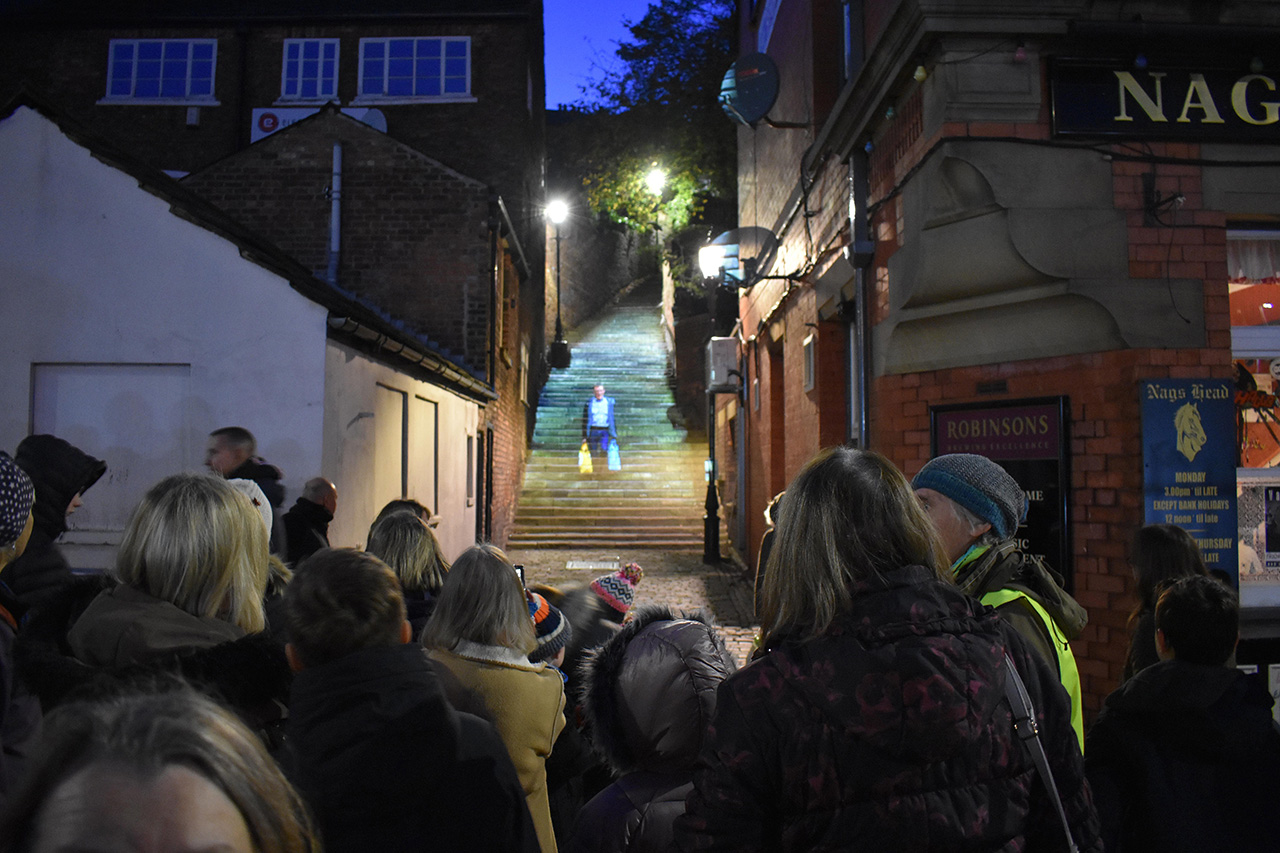 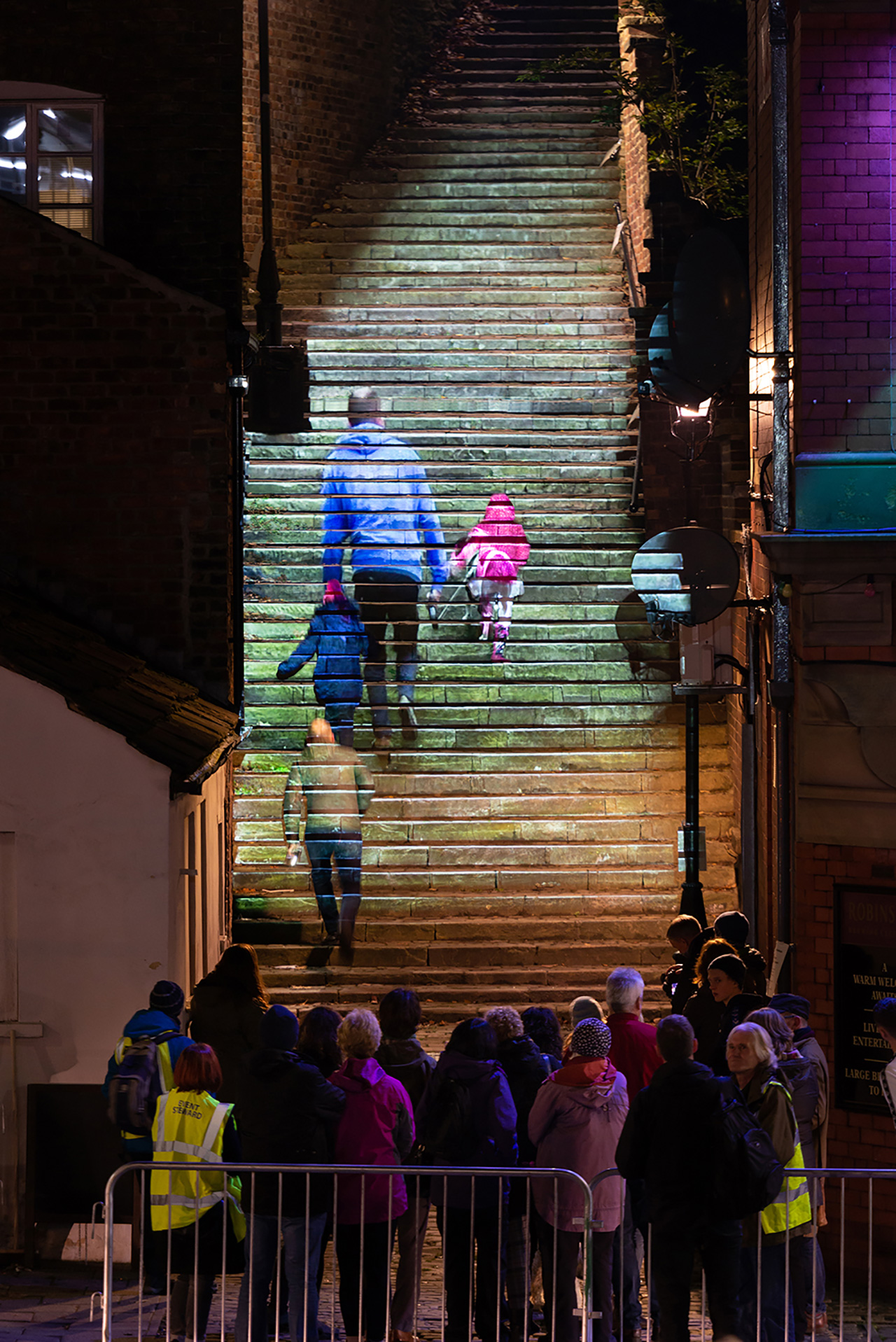 Q. Tell us about the inspiration for 108 Steps and how you developed it?

I was instinctively drawn to the 108 Steps, a historic set of steps, that runs from the train station to the town centre. Their continuous, steep form created a sort of canvas that captured various characters slowly moving up and down. I learnt more about them from people I met and many people had a personal story attached to the steps. I became certain that these should form the basis of the work. Through recording a week’s activity of the steps, and projecting this back onto the steps themselves, I wanted to give the steps a kind of ‘memory’. These memories, comprising individuals, groups, couples, animals, walking up and down, were at once mundane, but also incredibly characterful. They revealed something of the identity of residents today, through the eyes of a public staircase.

Q. What was it like working with the community in Macclesfield and how did they engage with the work?

I’d never been to Macclesfield, and was quite daunted by the idea of coming there to make a work in and about its public spaces. However, at no point did I feel like an outsider. I was introduced early on to a few people, through SHIFT, Barnaby Festival and the council, who helped me become involved in the community. There were no engagement processes as such; it was pubs, events, gigs, walks, a parade. By the end of the six month research and production period, it began to feel like a second home in a way. The actual process of making the work involved filming continuously for one week with the help of some great volunteers, so that also helped in getting to know people, and drawing attention to the work. The presentation of the work over three nights drew over 2,000 local residents, and was a really special experience for me. People would stay for the full hour-long projection (and it was freezing!), children would run up and down interacting with the projected people. It became a space where people shared stories, invited friends they’d spotted within the projections, and just spent time.

Q. How has your architecture background informed your work and how important is place?

There’s no doubt that studying architecture changes your perception of the built environment. You become attuned, and even obsessed, with the more everyday elements of places. It also instills in you an architectural conscience, a belief that everyone deserves the highest quality living environment, irrespective of wealth or background. I feel these characteristics have led me to make work that focuses on the more everyday aspects of our public spaces; believing that place is best defined and experienced in the spaces where we encounter each other; where we encounter differences.

Q. If you were to revisit 108 Steps, how would you develop it further or would you do anything differently?

I see 108 Steps, and the technique I used in it, as a process that can be replicated – by anyone. If I were to revisit the project I’d want to make the work collaboratively. I feel that the more involvement there is from those who live in and experience Macclesfield, and the steps, everyday, the more chance there is of capturing this sense of place and identity. Such an approach would also create a sense of collective ownership over the work, and hopefully give it a life of its own beyond this one-off installation. 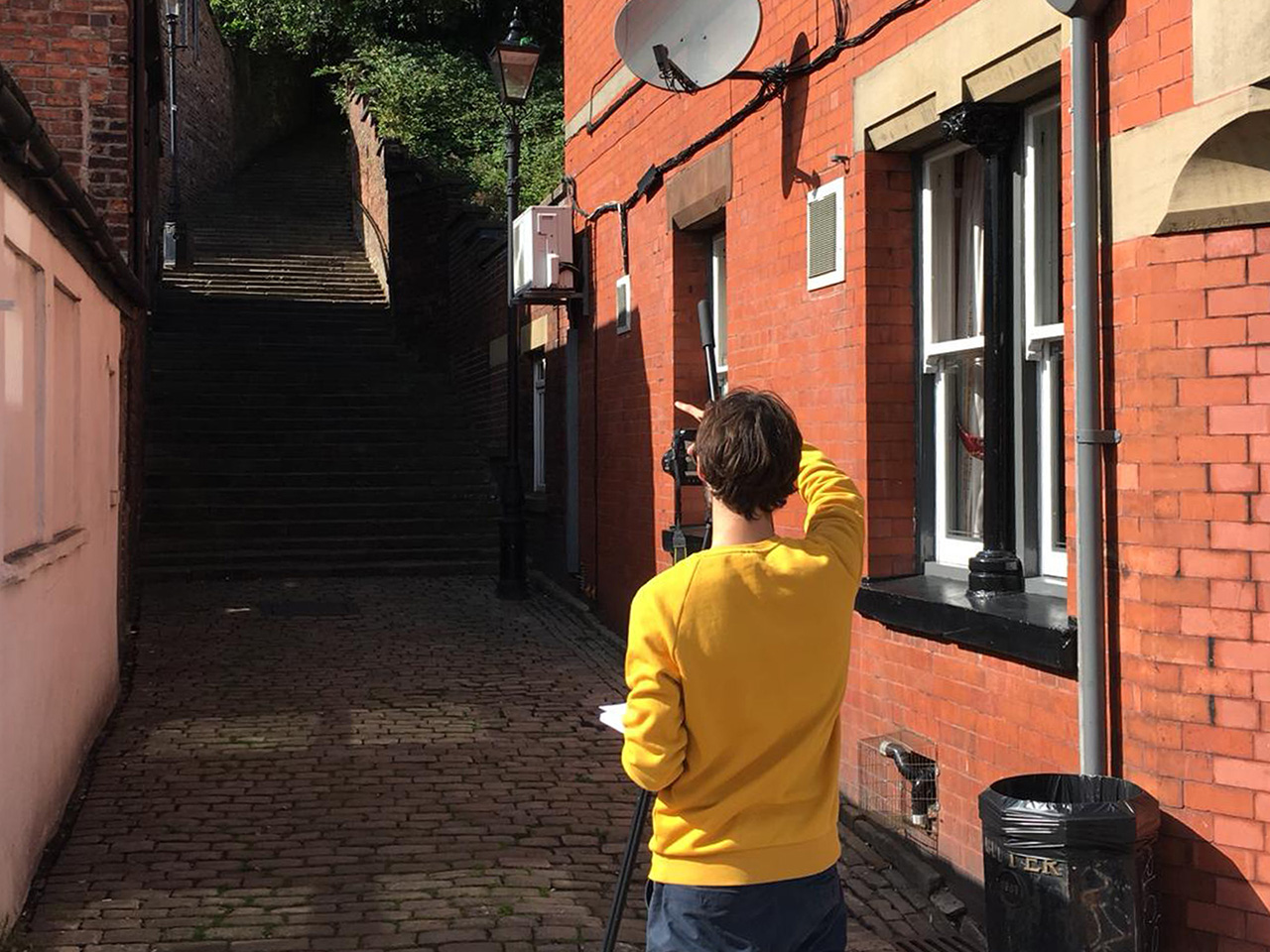 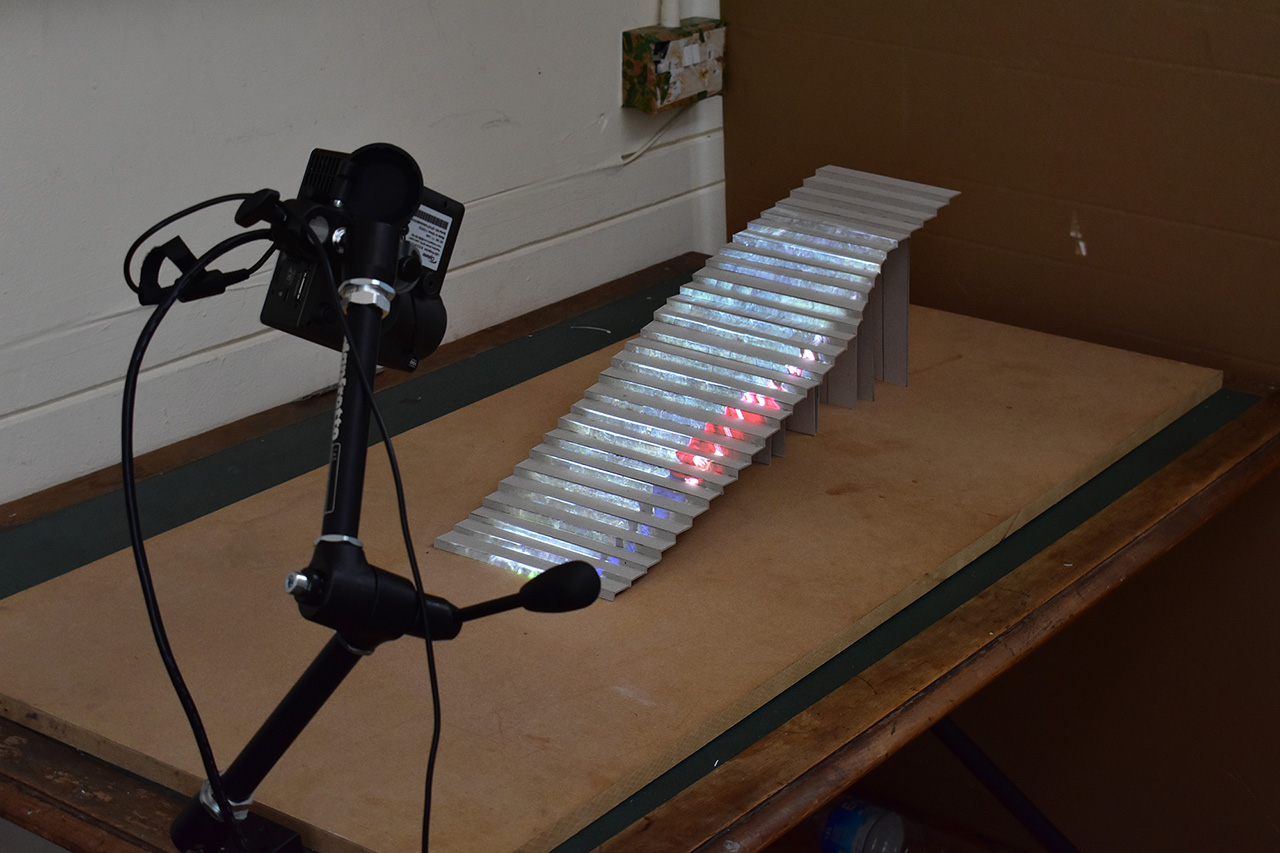 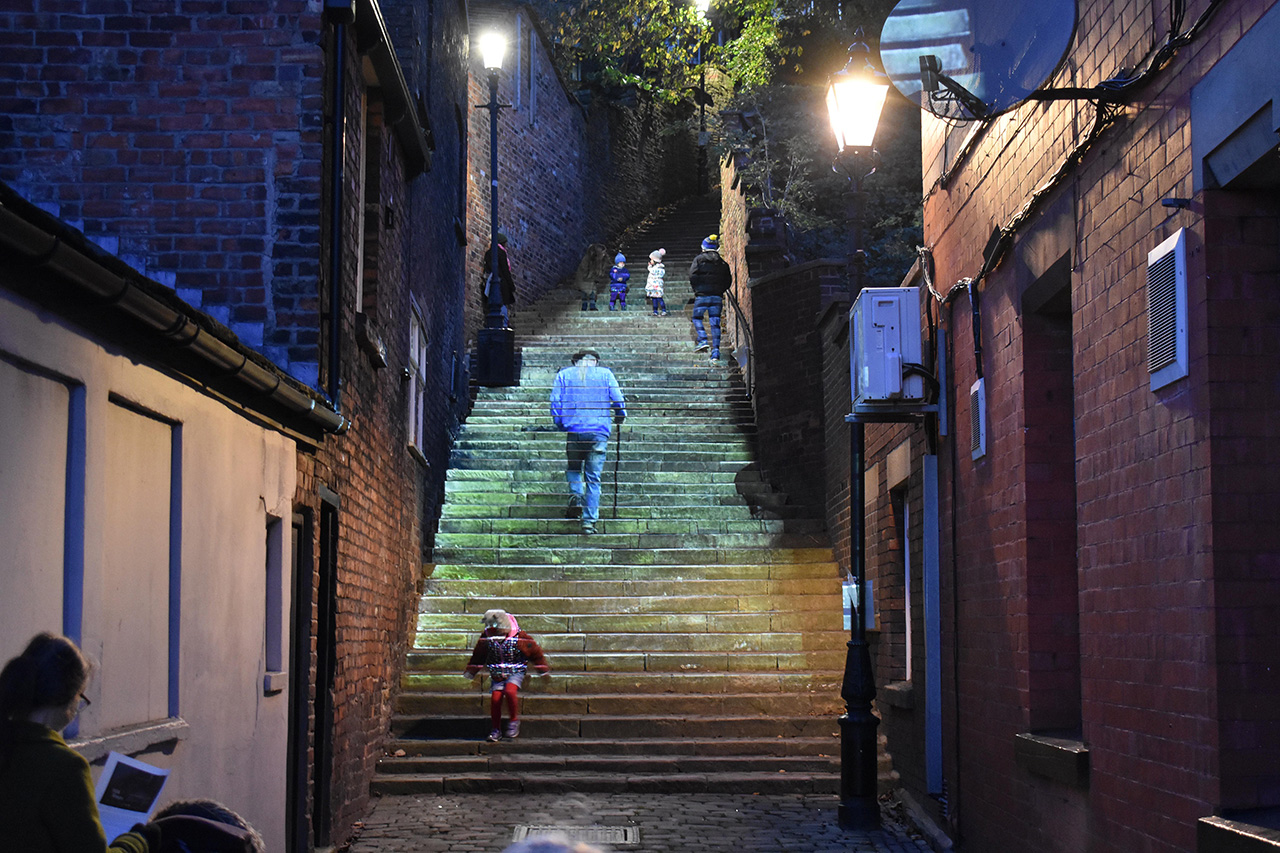